(ABC 6 News) – Kasson-Mantorville has had no shortage of great high school basketball players; but one KoMet, in particular, flew up and down the basketball court like no other.

Braxton Raymond is the all-time leading scorer for the Kasson-Mantorville KoMets as well as the man with the most three pointers made in the school’s history. However, his exceptional play on the court was matched and then some, by his generosity off of it.

Kelly Raymond, Braxton’s dad and a teacher at Kasson-Mantorville Middle School, describes his late son. "It didn’t matter if you were special ed or the start athlete. You know everybody was invited, everybody was in his friend group, and as a parent I don’t think there’s no better compliment."

Braxton always had a love for basketball, wearing the number 23 in honor of Micahel Jordan. However, in order to practice, Braxton had to ride his bike five miles one way before and after nearly four hours of practice.

Kelly Raymond mentions how often he would’ve been at the courts in Kasson had they been in the city while he was in high school. "He would’ve loved, he would’ve been here all day. I wish we didn’t have the memorial courts. It’s something for people to come here with their families." 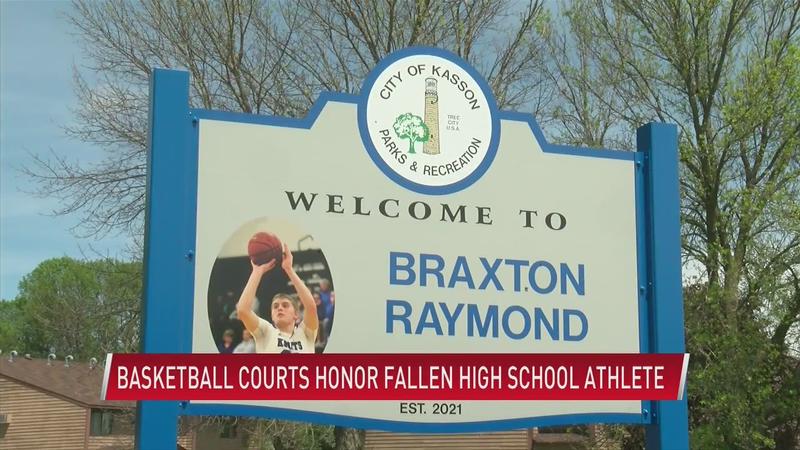 Braxton was diagnosed with stage 4 brain cancer in August 2018 and would lose his battle with cancer in October 2019. With his son’s story, Braxton’s dad Kelly was able to get basketball courts added to Lions Park in Kasson, a city that previously didn’t have any public basketball courts. This is where the cities of Kasson and Mantorville stepped in to help.

Kelly had to propose the idea to the cities of Kasson and Mantorville along with the Kasson-Mantorville Schools. He describes the experience. "It was one of the few unanimous votes, $25,000 to build these amazing courts, and then our family kicked in from the benefits and stuff to get the sign. We wanted to have a really good sign with a picture on it."

Sunday, Braxton’s family hosted a memorial event in which they received monetary donations for upgrades to the courts as well as officially commemorating the courts in his memory.

Kelly said next up is to add some benches as well as potentially add some tennis courts to Lions Park to bring the community together even more than it’s already been brought together.