(ABC 6 News) – Some of us buy lottery tickets every once-in-awhile but imagine if you were one of the five national finalists to become the Powerball First Millionaire of the Year. That’s the case for not one, but two Iowans this year.

It all started in September when those who bought Powerball tickets in Iowa could be entered through the Iowa Lottery’s Very Important Players (VIP) club in a drawing to determine the 20 semi-finalists of the First Millionaire of the Year promotion.

742 people nationwide would then move on to the big central drawing to determine the five finalists. Iowa Lottery players made more than 75,000 entries during that period. Including office manager Shari Beenken of Titonka, a community of about 500 people in Kossuth County. Beenken entered a dozen tickets she purchased on her own and found out she was one of the finalists before the official announcement. Prior to the announcement, she had to lie to some family including, her sister before she could announce the big news.

"She said so what’s ever come of that First Millionaire? I said, I don’t know, they said they’ll call me sometime in November," said Beenken.

For Rob Long of Waterloo, he bought the tickets on behalf of a group called Lotto 22. A group of his co-workers and friends who get together and pool their money to buy lottery tickets. Long said he entered about six to eight tickets per week during the four-week promotion period. 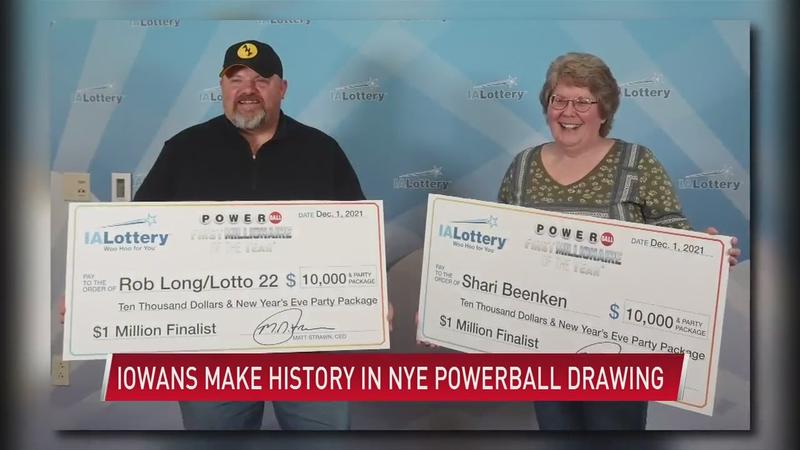 "She didn’t really come out right away to tell me I was one of the five finalists," said Long.

"And then when she told me that, I was shaking. I really didn’t know what to think."

With two Iowans in the running, Iowa has a 40 percent chance of having the million-dollar winner. The other finalists for the prize are from Illinois, Louisiana, and Pennsylvania.

"Shari and Rob have just been so fun," said Mary Neubauer, the Vice President of External Relations for the Iowa Lottery. "I put them on the spot and said, ‘ok, will you really be happy if the other person wins?’ And they both said ‘yes, absolutely. Let’s keep it in Iowa.’"

If Shari wins the prize, she and her husband will save the money to put it towards their dream of a cabin on the lake. But first, it will be used to buy a new dishwasher and stove. As for Rob, he’ll split the prize among the other members of Lotto 22, giving each person about $45,500 before taxes.

Whether or not they win the big prize, both Shari and Rob walked away with a $2,500 prize for being a semi-finalist. They also received $10,000 for being one of the five national finalists.

The winner will be announced during ABC’s broadcast of "Dick Clark’s Rockin’ Eve with Ryan Seacrest" on Friday, December 31. The announcement will happen at about 11:15 p.m. CST.