HS Football Preview: Trojans look to get ‘back to The Bank’

(ABC 6 News) — The Rushford-Peterson Trojans went undefeated in the regular season, outscoring opponents 311 to 102 and winning the Section 1A championship — before ultimately falling in the class a semifinal to Minneota.The team wants to get back but they want to blaze their own trail this year.

"Last year is last year," head coach Davin Thompson said. "They don’t want to graduate and say ‘my greatest memories was as a junior. It’s time for them to step up and take control of this football team and lead and get back there, do it their way, and put their stamp on it."

Coach Davin Thompson is putting extra honus on the run game this year — an area he says was their undoing in the playoffs last year.
One of the leaders of the team who will captain the trenches — offensively and defensively — is Andrew Wilkemeyer. He makes sure he sets the tone every day in practice

"Just come out here strong as ever," Wilkemeyer said. "Just keep going at it. Set the tone again. Go win a title again in section, district. Go back to that bank."

The Trojans have a lot of players who play both ways like Andrew. One, in particular, to look out for is Grady Hengel. The quick-footed multi-sport senior plays wide receiver and cornerback but he’ll easily tell you which side of the ball he likes the most. "Offense for sure," Hengel said. "I love mossing people." 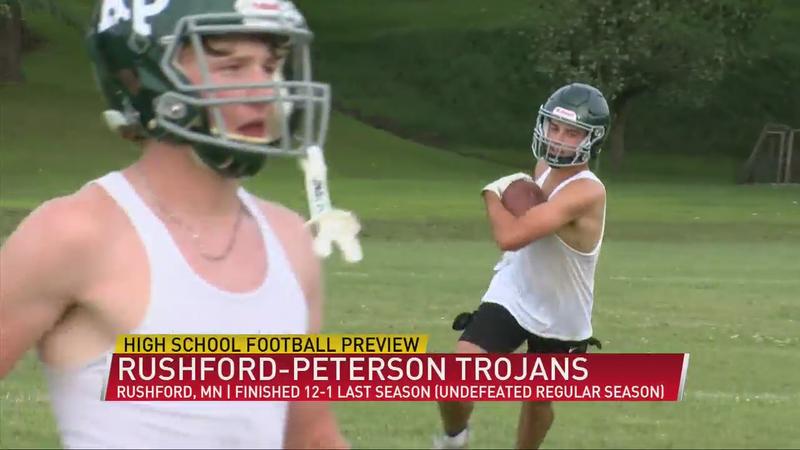 While the Trojans dazzle on offense — they make sure they keep that intensity on defense. "You have to do your job and if they can be disciplined, stay in their gap and do it at a high level then defensively, we’re really good," Thompson said. "Football is the ultimate team game. If you don’t have 11 guys running to the football in their gaps getting it done, a team can get one on you."

The Trojans may be small for a football team, but they are scrappy so underestimate them at your own peril. "It’s just kinda having that dog mentality," Hengel said. "We talked about losing a bunch of those seniors but we got 10th and 11th graders who are just kinda dogs and like to get after it each and every day and love to just sweat and grind."

"We gotta teach the young kids what to do," Wilkenmeyer said. "Say you got some small kid that knows what he’s doing. He might put a big kid on the ground. You just gotta teach him the ways."