HS Football Preview: Newman Catholic leaning on the next man up

The schedule in front of Knights football is one that includes a state champion, bitter rivals and those just as hungry to slash their way to the district championship.

"Definitely, we have a lot of tough opponents on the schedule," Knights quarterback Max Burt agreed. "West Hancock obviously winning it last year, they’ve got a lot of big role players coming back… and we have to approach it with a positive mindset, go in there, do our job to the best of our ability."

Depth is a vital factor for Newman Catholic, the loss of a senior one-two punch at running back has cleared the way for others to step up. And if Burt intends to repeat his all-district numbers from last year, his linemen will need to mature quickly.

"They have to realize that the work that they put in now is really going to pay off during the games," Knights head coach Rich McCardle said. "Because they really have to have a lot of stamina to go the distance in every game. A lot of those guys are playing both ways, so they really have to have the gas in the tank to continue through the whole ball game."

Defensively, five returning players will attempt to lock down the endzone, including both Burt and Tyler Wolf who both led the team with 85.5 total tackles in 2021. 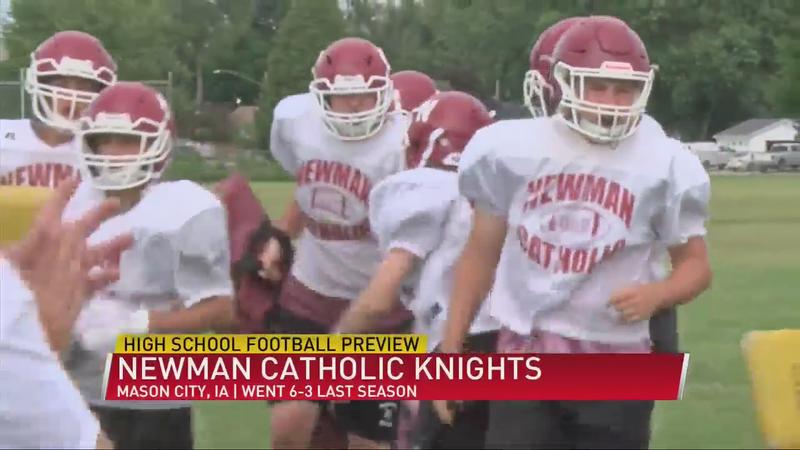 “Just go out there and have fun, that’s what defense is," Wolf stated. "I personally like defense the best, you just go out and you just play. [I have] been in in the weight room and all that, ready to roll, I’m excited to be out with the boys on a Friday night.”

The Knights believe themselves capable of standing toe-to-toe with many worthy foes this year. The ability to endure and adapt is something Newman Catholic is ready to prove this season.

“I’m really happy with the players that we have, we have got guys in place that can make some plays," Coach McCardle effused. "You’ll see the next group of guys really pull through. So I would keep an eye on those young guys I think they’ll make a statement.”

Newman Catholic plays West Hancock at 7 PM in Britt on September 2, a rematch of 2021’s 32-6 home loss to the Eagles.