HS Football Preview: Cadets regrouping for a rebound in 2022

(ABC 6 News) — Despite a rough start to Justin Denner’s cadets head coaching tenure in 2021, he still has winning expectations in mind and knows Crestwood’s ceiling is higher than last year’s 1-7 record.

Justin denner, cadets football head coach
"Each day that we get out there, we want to try and make sure that we’re better," Denner stated. "And so, that’s the goal each day and to make sure to remind them that whatever happens today is not the end all, be all; that we’re going to be a better team when we get ready for week 1 with Decorah."

As the cadets’ run-heavy offense looks to rebound, future success will depend on limiting turnovers. It’s a process QB Cole Butikofer struggled with a year ago.

"Playing smarter, not making such bad decisions, improving on that," Butikofer reflected. "Me and my coaches have been working together, seeing what I could do better, what I should’ve done there rather than what I did."

Defensively, it’s going to take everyone to replicate the kind of effort Landen Schammel and Carter Johnson had in 2021 as both seniors led the cadets in tackles for a loss. 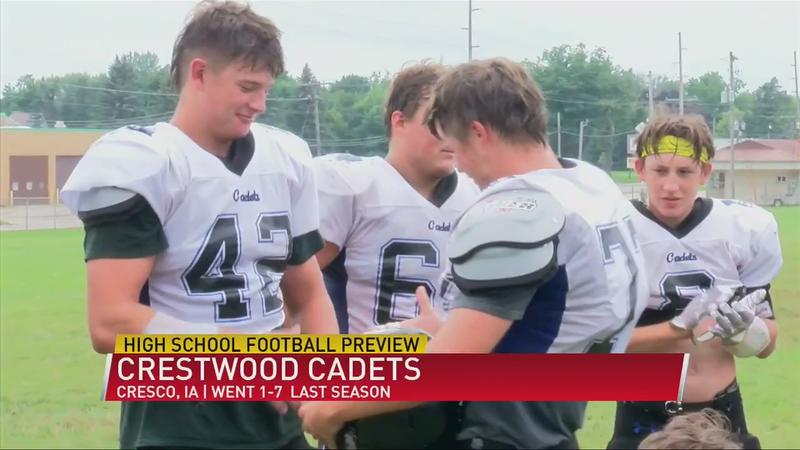 The team will also have a new tradition: Every week, Crestwood’s captains will give props to an outstanding player, and as the season continues, they hope to honor many cadets as they set their sights on a winning campaign.

"I felt it was only right that then those captains then turn around and say, "Hey, you entrusted us with what you believe,’ Denner said. "Now we’re going to then say, ‘hey, appreciate you for what you’ve been doing.’ And so, every week’s going to be a fun week for us and I’m really excited and grateful for the opportunity for us to get out and play."

The Cadets open their season at Decorah on August 26th at 7:30 PM.