(ABC 6 News) — For the second time in a row, Hayfield Vikings boys basketball is playing for state gold.

The defending Class A champions will try to win back-to-back titles on Saturday after defeating #5 Cherry, 72-61 in the semifinals. The game was a rematch of a February 5 contest that Hayfield won 78-65.

In the second half, both teams started firing haymakers with an admirable effort from Cherry’s team. Sophomore Isaac Asuma led the Tigers with 36 points, but what is perhaps more surprising is how his brother, Noah, and cousin, Isaiah, were in the starting lineup while still middle schoolers. Nevertheless, the Vikings had the stronger experience and poise.

"We made so many hustle plays and get steals, I thought that was a huge part of the game," Hayfield head coach Chris Pack said postgame. "You know, as many turnovers as we had, they probably had — I don’t know what the final number was. But, it had to be pretty close. And I felt like ours were momentum-changing steals and hustle plays that really gave us — well, a couple of them led to baskets." 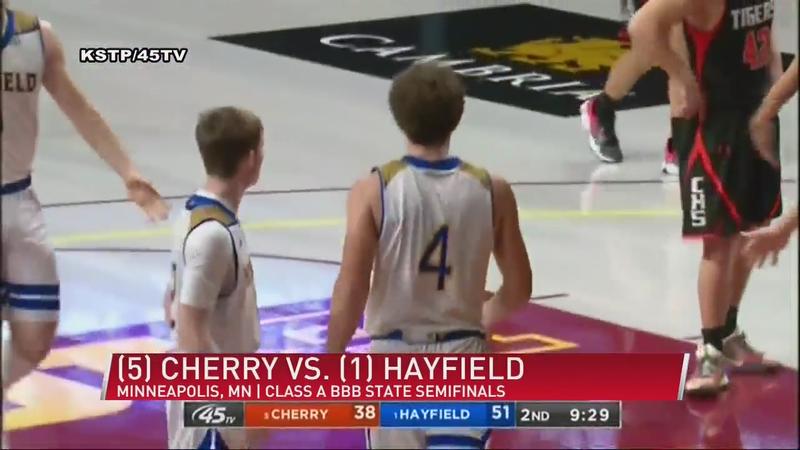 Coach Pack did feel things could’ve gone better despite the win. The Vikings only made 14 out of 29 free throw attempts, in addition to only four three-pointers out of nine tries.

The #1 Vikings will play #2 Belgrade-Brooten-Elrosa on Saturday for the Class A Championship at 11 AM. The game is at Williams Arena in Minneapolis and will be on channel 6.2 This TV.

Hayfield is going to the Championship game tomorrow. Great game guys. Proud of you.