(ABC 6 News) – Rochester man Sterling Haukom received a sentence of 96 months in jail for the 2021 death of a young woman, the maximum punishment for his charge of vehicular homicide.

He will receive credit for 433 days served.

Haukom pled guilty in December 2021 to a charge of criminal vehicular homicide-operating a motor vehicle in a negligent manner, which resulted in the death of 18-year-old Erika Cruz.

"Like a bullet" is how a witness at the scene of the crash described Sterling Haukom’s truck just before he struck and killed Cruz.

The day after the crash, the 35-year-old told police he had just left a bar and that he was angry. 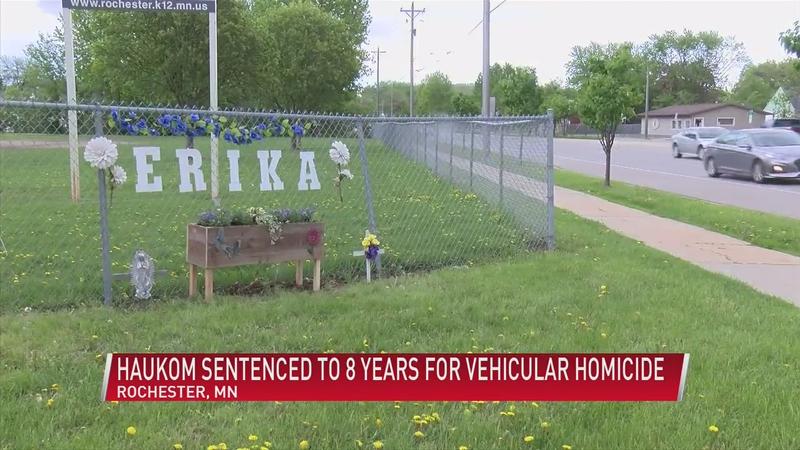 "I was upset. I just got in a bar fight," said Haukom on video at the police station.

"Fueled by rage and extreme intoxication and without regard for anybody else, the defendant turned his vehicle into an indiscriminate weapon and took the life of an 18-year-old young woman," said Deputy Olmsted County Attorney Eric Woodford.

The normal sentence in a vehicular homicide case is four years. But, the state asked that Haukom’s sentence be doubled, saying his crime was worse than others of the same charge.

In a five-page ruling issued earlier in 2022, Olmsted County judge Jacob C. Allen ruled that Haukom’s conduct was “significantly more serious that that typically involved in the commission of Criminal Vehicular Homicide – Operating a Motor Vehicle in a Negligent Manner While Under the Influence of Alcohol.”

"For such a young promising life to be so tragically and presentably curt short makes this case even more egregious," said Woodford.

And, Monday, Olmsted County Judge Jacob Allen agreed, "I hereby commit you to the dept. of corrections for a period of 96 months."

Erika Cruz was on her way home from her second job, around 10 p.m., on February 23, 2021, when the two cars collided on 12th St. SW and 8th Ave. in Rochester, then slid into the fence at Lincoln Elementary. Both Haukom and Cruz were just blocks away from their homes.

Cruz had dreams of someday becoming a personal trainer. Her father said she couldn’t think of any better way to help people than to show them how to live long, healthy lives. The gym she frequented in northeast Rochester now holds a mural in her honor.

And, over a year after the crash, a memorial still stands along the fence outside Lincoln Elementary school.

Monday, Haukom had a chance to address Cruz’s family and friends saying, "I’m so utterly sorry and if there’s ever something I can do, I will."

Cruz’s mother had a victim impact statement read in court for her, saying the day he killed Erika he also took her life. Erika’s father saying when he got to the scene that February night, he was looking for the train he thought had hit her car.

During Haukom’s interview with police the day after the crash, he told them he knew he had a drinking problem, but just didn’t know where to get help.

"For many people that use alcohol use drugs, it takes a very negative consequence for them to even seek help," said Tim Volz, an addiction counselor in Rochester. He says if you think you need help, taking an assessment is a good place to start, "after that assessment they will recommend certain levels of care, whether it be a DUI class, outpatient treatment, intensive outpatient treatment."

Volz adds there are plenty of accessible resources in the community, you just have to be ready and willing to seek them.

When Haukom’s sentence is over, he will be 43 years old. Monday in court he said he wants to dedicate the rest of his life to preventing tragedies like the death of Erika Cruz.