Half of US adults exposed to harmful lead levels as kids 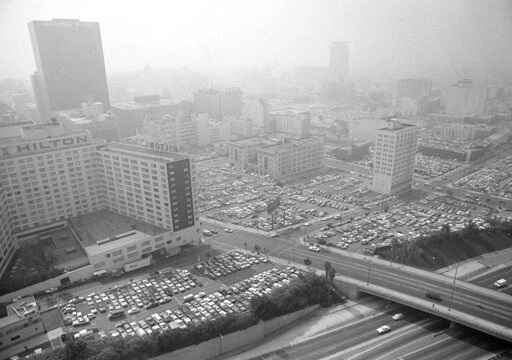 FILE - This Sept. 13, 1979, file photo shows motorists as downtown parking lots fill up in Los Angeles. Over 170 million of people born in the United States who were adults in 2015 were exposed to harmful levels of lead as children, according to a study published in the Proceedings of the National Academy of Sciences on Monday, March 7, 2022. The researchers looked only at lead exposure caused by leaded gasoline, the dominant form of lead exposure from the 1940s to the late 1980s, according to data from the U.S. Geological Survey. (AP Photo/Wally Fong, File)[ASSOCIATED PRESS/Wally Fong]

Over 170 million U.S.-born people who were adults in 2015 were exposed to harmful levels of lead as children, a new study estimates.

Researchers used blood-lead level, census and leaded gasoline consumption data to examine how widespread early childhood lead exposure was in the country between 1940 and 2015.

In a paper published in the Proceedings of the National Academy of Sciences on Monday, they estimated that half the U.S. adult population in 2015 had been exposed to lead levels surpassing five micrograms per deciliter — the Centers for Disease Control and Prevention threshold for harmful lead exposure at the time.

The scientists from Florida State University and Duke University also found that 90% of children born in the U.S. between 1950 and 1981 had blood-lead levels higher than the CDC threshold. And the researchers found significant impact on cognitive development: on average, early childhood exposure to lead resulted in a 2.6-point drop in IQ.

The researchers only examined lead exposure caused by leaded gasoline, the dominant form of exposure from the 1940s to the late 1980s, according to data from the U.S. Geological Survey. Leaded gasoline for on-road vehicles was phased out starting in the 1970s, then finally banned in 1996.

Study lead author Michael McFarland, an associate professor of sociology at Florida State University, said the findings were “infuriating” because it was long known that lead exposure was harmful, based on anecdotal evidence of lead’s health impacts throughout history.

Though the U.S. has implemented tougher regulations to protect Americans from lead poisoning in recent decades, the public health impacts of exposure could last for several decades, experts told the Associated Press.

Early childhood lead exposure is known to have many impacts on cognitive development, but it also increases risk for developing hypertension and heart disease, experts said.

“I think the connection to IQ is larger than we thought and it’s startlingly large,” said Ted Schwaba, a researcher at University of Texas-Austin who studies personality psychology and was not part of the new study.

Schwaba said the study’s use of an average to represent the cognitive impacts of lead exposure could result in an overestimation of impacts on some people and underestimation in others.

Previous research on the relationship between lead exposure and IQ found a similar impact, though over a shorter study period.

Bruce Lanphear, a health sciences professor at Simon Fraser University in Vancouver who has researched lead exposure and IQ, said his 2005 study found the initial exposure to lead was the most harmful when it comes to loss of cognitive ability as measured by IQ.

“The more tragic part is that we keep making the same … mistakes again,” Lanphear said. “First it was lead, then it was air pollution. … Now it’s PFAS chemicals and phthalates (chemicals used to make plastics more durable). And it keeps going on and on.

“And we can’t stop long enough to ask ourselves should we be regulating chemicals differently,” he said.

The Associated Press Health and Science Department receives support from the Howard Hughes Medical Institute’s Department of Science Education. The AP is solely responsible for all content.