(ABC 6 News) – Minnesota Governor Tim Walz was at the First Alliance Credit Union in northwest Rochester Thursday to talk about the importance of delivering $2 billion in direct relief to Minnesota families.

The governor and Lt. Gov. Peggy Flanagan’s budget proposal would give one-time payments of $500 to single-tax filers. Married couples would receive a $1,000 payment.

"I think everybody sitting out there right now if your family received $1,000 trying to make sure it does not have an impact on your taxes next year, it’s going to have an effect," said the governor.

"I think maybe people pay a bill, it will be their choice. They might put it into gas, they might see it as an opportunity to maybe take a weekend off with their family and go do something. And again, the state of Minnesota did not raise taxes. And, we’re not asking to add new programs, we’re asking to give it right back."

There was a reason the governor stopped at First Alliance on Thursday, it’s because the relationship between credit unions and legislators is actually bigger than you might think. 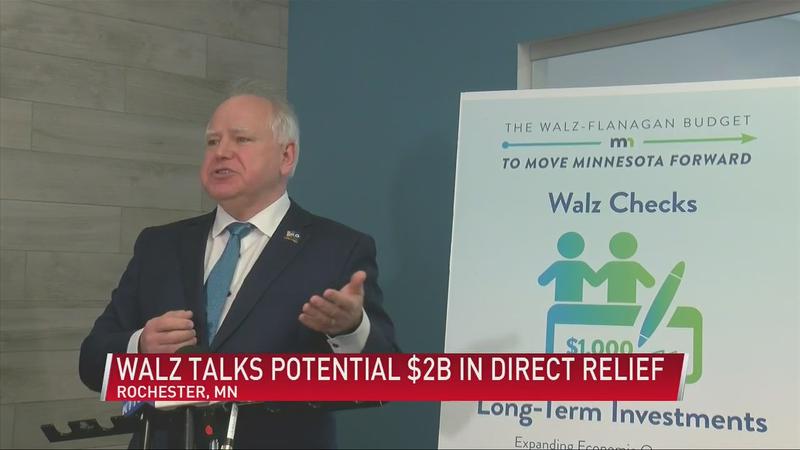 "Meeting with your federal legislators, your senators, and to talk about, you know, legislation and issues that are important to credit unions and their members," said Michael Rosek, president, and CEO of First Alliance Credit Union.

"There’s a good correlation and a good relationship there between what happens in the state legislature in terms of consumer advocacy."

On the Republican side of the aisle, lawmakers are calling for permanent tax cuts rather than sending checks to Minnesotans.

The governor said the goal is to build the infrastructure now so that if the bill is passed, Minnesotans can get their checks within six weeks.