Federal lawsuits filed against Chauvin, city of Minneapolis and multiple other officers 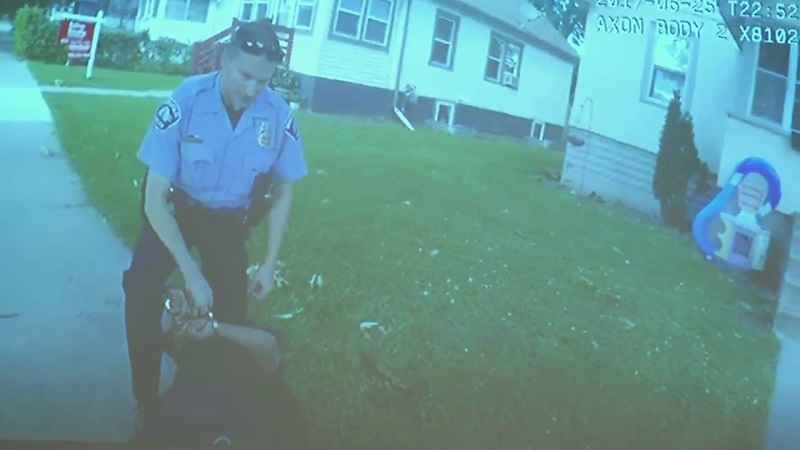 A screenshot of bodycam video shown by Zoya Code's attorneys on May 31, 2022, alleging misconduct by Chauvin in 2017.

According to the lawyers, the lawsuits stem from incidents that go back to 2017, and have been filed on behalf of John Pope and Zoya Code.

Civil rights attorneys say Pope was 14 years old in 2017, and officers were called to his home for a reported domestic disturbance. The attorneys say Chauvin was one of the officers who responded, and he entered Pope’s bedroom, where Pope was on his cell phone and lying face down on the floor.

Attorneys say “Chauvin rushed Pope and struck him multiple times on the head with a large flashlight” and “pinned Pope to the floor with his knee, the same tactic he used on George Floyd, and held him in the prone position for 15 minutes, while Pope was handcuffed behind his back,” adding there were eight other officers – some who are no longer employed with the department – at the scene and who didn’t intervene.

The complaint alleges Chauvin hit Pope in the head multiple times with a metal flashlight, and eventually, put Pope on the floor in the prone position with a knee on Pope’s upper back and neck. During this time, the complaint identifies Alexander Walls as the only officer with Chauvin.

Documents go on to say five other officers – identified in the complaint as Joshua Domek, David Nerling, Graham Plys, David Robins and Lucas Peterson – responded to the home after either Chauvin or Walls radioed the situation was under control, and none of the officers intervened.

In Pope’s case, a complaint filed in federal court says the following charges have been filed:

City officials also noted the first dates of employment for all the officers with the department:

A complaint filed in federal court says Code is demanding money for damage she sustained during use of excessive force by Chauvin on June 25, 2017.

The complaint states she reported pain and myalgia due to the arrest, and was diagnosed in July with “major depressive disorder, single episode, moderate” and “unspecified trauma-and stressor-related disorder.” The complaint also notes she previously suffered from PTSD, and is continuing to attend counseling and therapy.

Meanwhile, attorneys allege Chauvin also used excessive force on Zoya Code while she was handcuffed and not resisting arrest, saying he slammed her head on the ground, and put his knee on the back of her neck. He also allegedly moved her handcuffed arms behind her head while she was face down, the complaint states.

In Code’s case, a federal complaint states the charges include:

In Zoya’s complaint, it is alleged that Chauvin had at least 16 civilian complaints made against him prior to his encounter with Zoya in 2017, and only received two letters reprimanding the actions.

The incidents involving John Pope and Zoya Code are disturbing. We intend to move forward in negotiations with the Plaintiffs on these two matters and hope we can reach a reasonable settlement. If a settlement cannot be reached on one or both lawsuits, the disputes will have to be resolved through the normal course of litigation.

Both of the alleged incidents were caught on body cameras, and attorneys say copies of the body-worn camera images are expected to be released Tuesday afternoon.

Chauvin is currently serving 22 1/2 years after being convicted on state charges of second-degree unintentional murder, third-degree murder and second-degree manslaughter in Floyd’s 2020 death. However, Chauvin filed an appeal in that case.

In Minnesota, defendants with good behavior serve two-thirds of their sentence in prison, and the remaining one-third on supervised release, also known as parole. Under that formula, Chauvin is expected to serve 15 years in prison on the state charges, and 7 1/2 years on parole.

In addition, Chauvin was charged in federal court with violating Floyd’s civil rights when he knelt on Floyd’s neck for more than nine minutes while he was facedown on the pavement, wasn’t resisting and was pleading for air.

In the federal case, Chauvin reached a plea agreement, where prosecutors asked U.S. District Court Judge Paul Magnuson to sentence Chauvin to between 20-25 years in federal prison. He was facing up to life in prison.

His guilty plea – which was entered in December – meant he avoided a federal trial. A judge accepted the plea deal earlier this month.

As part of the plea deal, Chauvin also pleaded guilty to violating the rights of a then-14-year-old boy during a 2017 arrest in which he held the boy by the throat, hit him in the head with a flashlight and held his knee on the boy’s neck and upper back while he was prone, handcuffed and not resisting.

A sentencing date for the federal charges has not been scheduled as of this time.