"I think on this Easter Sunday we’re filled with a lot of gratitude," said Gary Kasel.

They’re grateful, because even though Tom Kasel and his girlfriend Jewel Andree did not leave last week’s storms unharmed, they are alive.

"It seems like it brings the family together more and that’s a good thing," Tom Kasel said.

Tom and Jewel were about to step under their basement stairwell when the house slid off it’s foundation. Tom and Gary describe the incident as piled cinder blocks on top of the pair. They were trapped in the rubble for minutes before Tom’s brother, Gary, came to pull them out. 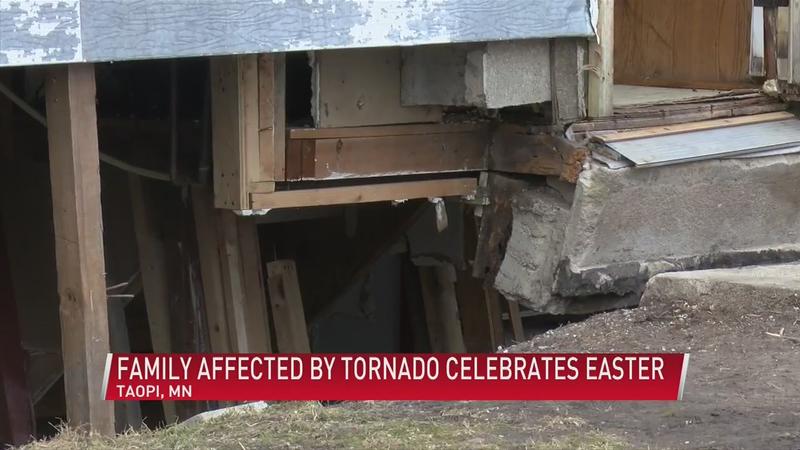 "It went through my head when I was jumping in that basement — is this house going to stay or not?" Gary said.

It may have only been minutes, but Tom said it felt like they were trapped for hours.

"It was just a matter of a split second and we yelled. We were both in a lot of pain. I wanted out. We both wanted out. We thought it was over," Tom said of the incident

The pair sustained injuries to their ribs, legs, and hips. Their house and parts of their farm are a total loss.

Tom was discharged from the hospital Friday and Jewel, after having two surgeries, is still there. The family is not sure when she’ll be healthy enough to leave.

However, the Kasel family is mostly reunited in time for Easter. And they are optimistic.

"It just brings gratitude. Gratitude for the resurrection of our lord, gratitude to god just for life," Gary said.

Those who would like to financially help the Kasels, and other families impacted by the tornado in Taopi, can call the United Farmers State Bank of Adams at (507) 582-3448. People can donate specifically to Tom Kasel and Jewel Andree, or to the entire town of Taopi — just specify which.

Checks can be made payable to: Tom Kasel / Jewel Andree Relief Fund

OR United Farmers State Bank with “Tom/Jewel” in the memo of the check. Any cash payments to the bank must indicate they are to go to this fund.