(ABC 6 News) – In the 2021 legislative session, lawmakers agreed getting frontline workers some extra money was a priority. Their goal is to thank essential workers for putting their lives on the line, and to help keep businesses afloat. However, that is about where the agreement stops. Now almost a year later, democrats and republicans cannot decide on what the word "frontline" actually means.

On Monday, democratic lawmakers from around Minnesota met with childcare professionals and educators at Kids Choice Childcare Center in Rochester to discuss who is eligible to receive pay.

"If our center and others like us shut down, the whole community will be negatively impacted," said Helen White, the assistant director at Quality Kids Child Care.

In the democratic proposal, childcare providers along with grocery store and service workers would be considered "frontline."

"Childcare workers especially, because they made it possible for all workers to be in their workplace. I want to say to my GOP colleagues: now is the time. It is the moment. We have the money," said Rep. Cedrick Frazier (DFL – New Hope), a member of the bonus pay working group. 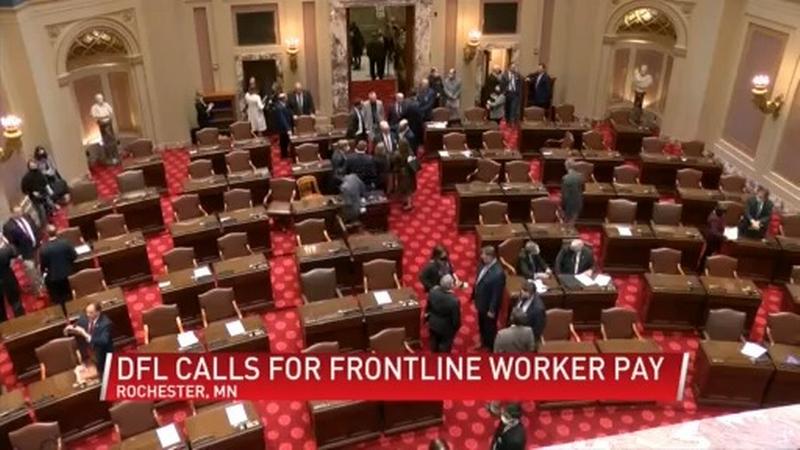 However, Minnesota republicans want to stick to what they believe is the "original" point of the bonus pay — thanking people who directly interacted with COVID-19 patients.

"We want to see our frontline people get this, and we may not be able to if the DFL doesn’t agree to come towards us on this," said Sen. David Senjem (R – Rochester).

Rep. Liz Boldon (DFL – Rochester) believes that division in the Senate, could hold up bonus pay.

"Certainly in the House I expect we will be taking it up soon and we will get it passed. And the senate needs to do the same," she said.

DFL Senators in the bonus pay working group say the initial amount of money should be quadrupled from $250 million to $1 billion by using some of the state’s historic $7.7 billion surplus. This means around 667,000 frontline workers would each get a $1,500 check. Those required to go to work by the state during the stay at home order would qualify.

"Childcare workers and providers came to work every day at their own risk because the state required them to show up," White said.

The House will meet to hear this proposal on Wednesday. Some are hopeful the bill will pass through the democrat controlled House of Representatives quickly, but understand it could get hung up in the republican controlled Senate.