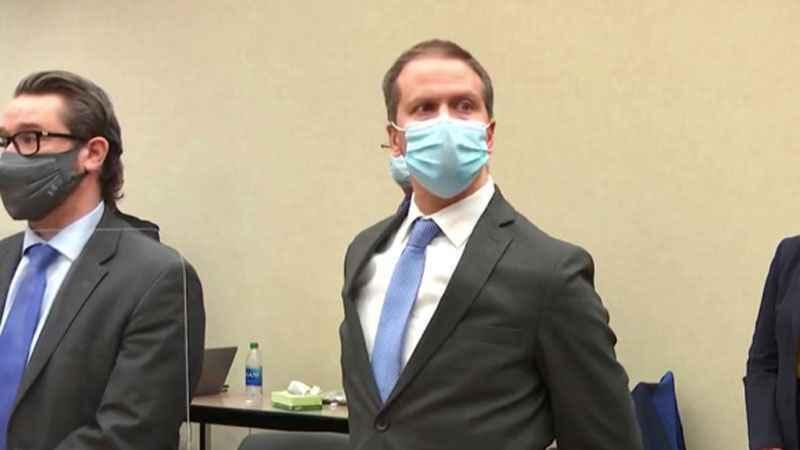 Photo: Court TV via AP, Pool. In this image from video, former Minneapolis police Officer Derek Chauvin, center, stands after the verdict is read in his trial for the 2020 death of George Floyd, Tuesday, April 20, 2021, at the Hennepin County Courthouse in Minneapolis, Minn. Standing next to him are attorneys Eric Nelson, left and Amy Voss.

MINNEAPOLIS (AP) – The former Minneapolis police officer convicted of murder in the death of George Floyd pleaded not guilty Thursday to allegedly violating the civil rights of a teenager in a separate case that involved a restraint similar to the one used on Floyd.

Derek Chauvin was convicted earlier this year on state charges of second-degree unintentional murder, third-degree murder and second-degree manslaughter in Floyd’s 2020 death. He was sentenced to 22 1/2 years. He’s also charged in federal court with violating Floyd’s civil rights when he knelt on the Black man’s neck for about 9 1/2 minutes as Floyd was facedown on the pavement, not resisting and pleading for air.

But another indictment against Chauvin alleges he carried out a similar act against a then-14-year-old boy in 2017. This indictment alleges Chauvin deprived the teenager, who is Black, of his right to be free of unreasonable force when he held the teen by the throat, hit him in the head with a flashlight and held his knee on the boy’s neck and upper back while he was prone, handcuffed and not resisting.

When U.S. Magistrate Judge Hildy Bowbeer asked how he would plead to the charge, Chauvin replied, "Not guilty, your honor."

Thursday’s hearing was held via videoconference, and Chauvin appeared from the state’s maximum security prison, where he’s being held following his murder conviction. He was in a large room, and wearing a plain T-shirt as he sat at the head of a long table. No one was visible in the room with him, but a man was seen behind a window pane over Chauvin’s shoulder. He had some paper on the table in front of him and appeared to take notes.

Thursday’s hearing also addressed some pretrial motions, which were routine.

According to a police report from the 2017 encounter, Chauvin wrote that the teen resisted arrest and after the teen, whom he described as 6-foot-2 and about 240 pounds, was handcuffed, Chauvin "used body weight to pin" him to the floor. The boy was bleeding from the ear and needed two stitches.

That encounter was one of several mentioned in state court filings that prosecutors said showed Chauvin had used neck or head and upper body restraints seven times prior to Floyd’s death dating back to 2014, including four times state prosecutors said he went too far and held the restraints "beyond the point when such force was needed under the circumstances."

Chauvin and three other former officers – Thomas Lane, J. Kueng and Tou Thao – were arraigned on civil rights violations in Floyd’s death on Tuesday. All four pleaded not guilty to those charges. The indictment in the 2017 case was filed the same day as the one for Floyd’s death.

According to the indictment in Floyd’s death, the officers allegedly deprived Floyd of his rights while acting under government authority. The federal indictment alleges Chauvin violated Floyd’s right to be free from unreasonable seizure and from unreasonable force by a police officer. Thao and Kueng are charged with violating Floyd’s right to be free from unreasonable seizure by not intervening to stop Chauvin as he knelt on Floyd’s neck. All four officers are charged with depriving Floyd of his rights when they failed to provide medical care.

Floyd repeatedly said he couldn’t breathe as Chauvin pinned him to the ground. Kueng and Lane helped restrain Floyd; Kueng knelt on Floyd’s back, and Lane held Floyd’s legs, according to evidence in state court. Thao held back bystanders and kept them from intervening.

Find AP’s full coverage of the death of George Floyd at: https://apnews.com/hub/death-of-george-floyd