(ABC 6 News) – As the crisis in Ukraine continues, people no matter where you look throughout our area, are trying to find a way to help people in Ukraine as they fight for their country.

In Minnesota, there is a statewide effort to help the people of Ukraine to get any equipment they need, such as ballistic vests and helmets. It’s organized by the Minnesota Sheriff’s Association. The Sheriffs in each district of the state are invited to gather any equipment they can gather to help. One who answered the call is the Fillmore County Sheriff’s Office.

In total, the Fillmore County Sheriff’s Office donated 28 ballistic and tactical vests, along with 25 ballistic helmets that will be sent to Ukraine to aid them in their fight against Russia. 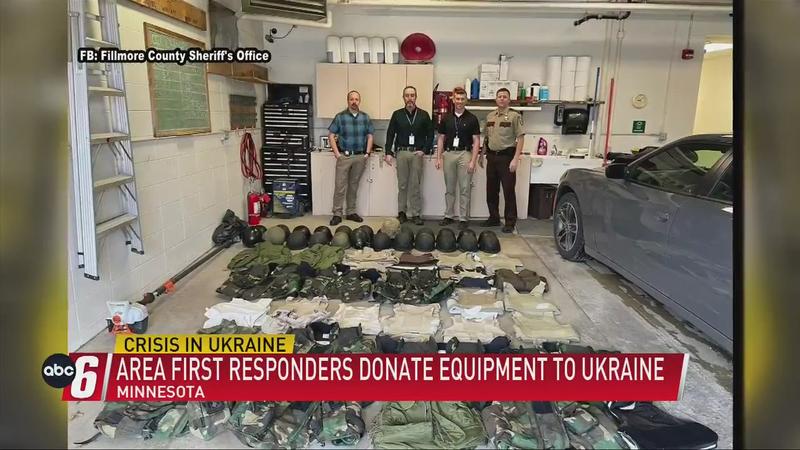 "Somebody who’s in a conflict, where they’re fighting for their freedom, they’re fighting to keep their families, their lives safe and intact, we’re happy to provide any little bit of help that we can from wherever we are," Sheriff DeGeorge said.

The vests were worn by the Fillmore County Sheriff’s Office Deputies. They’re replaced every five years due to grant funding to get new ones, they keep these just in case the need is there, and now there is.

"A couple of the deputies have said I’m going to watch the news and pay attention to see if I see one of our vests out there," Sheriff DeGeorge said.

"If you have the opportunity to help our brothers and sisters, no matter where they’re at, throughout the world, we’re glad to be able to take that opportunity," Kasson Fire Chief Joe Fitch said.

Fire Chief Fitch is also answering the call to help the people of Ukraine.

His department donated 28 air packs with some masks, gloves, boots, helmets, pants, and coats to the Oronoco Fire Department — who will send them to Ukraine.

"This brotherhood doesn’t just reach our corner of Minnesota, it’s a statewide thing, being able to help is why we do what we do," Fire Chief Fitch said.

This is something that local first responders are answering the call to, and it’s helping in more ways than one.