(ABC 6 News) – Minnesota moves into this election season against the backdrop of the select committee hearings on the Janurary 6 attack on the U.S. Capitol. In an exclusive ABC 6 News/SurveyUSA poll, most voters Southern Minnesota say those hearings will have an impact on who they vote for to represent them in Congress.

The upcoming Aug. 9 special election is to fill the late Jim Hagedorn’s seat in the U.S. House of Representatives. Hagedorn voted against certifying the 2020 presidential election results shortly after rioters attacked the Capitol.

"Is a connection to the Washington D.C. establishment, and particularly President Trump, is that a good thing or is that a bad thing?" posed Shane Baker, ABC 6 News political analyst.

A relevant question, because Republican candidate Brad Finstad served in the Trump administration as a state agriculture official and has been vocal about his support for Donald Trump.

Baker also says the January 6 Capitol riot and the hearings that followed, will have an impact on who people choose to represent them in Washington. 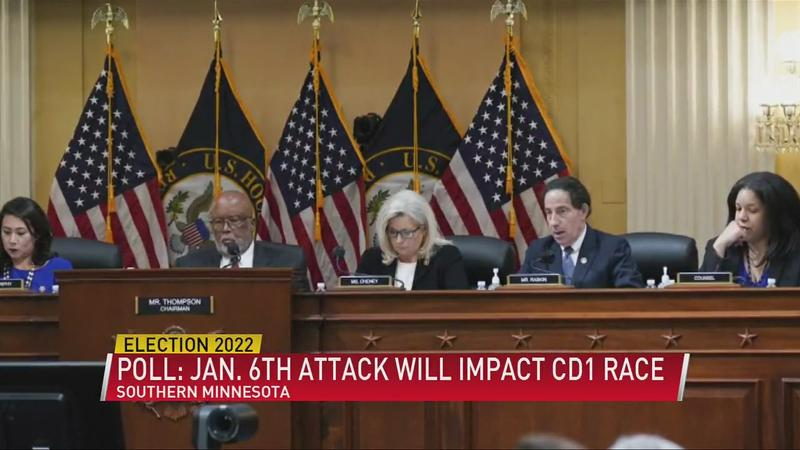 Of voters following the hearings, 38% say they have a major impact and 24% say thery have a minor impact on their vote. The survey says most of these voters back Democrat Jeff Ettinger.

But 36% say the hearings will have no impact on their vote. The survey says these voters prefer Finstad.

"Typically we would see having that expertise, those connections and that experience as a really, really good thing. I would imagine it’s the Democrats job to explain to the citizens of Southern Minnesota why it’s not a good thing," Baker said.

The full ABC 6 News/SurveyUSA Poll results can be found below.