6 On Your Side: Consumer Confidence, Best Speakers for the Beach or Pool

(ABC 6 News) – Who doesn’t love listening to some good tunes while relaxing at the beach or the pool?

The best sound starts with the right portable speaker, and that speaker needs to stand up to the occasional splash of water. That’s where Consumer Reports comes in with some great suggestions for Bluetooth speakers you can take just about anywhere—without breaking the bank.

“These speakers were selected because they were small, relatively small, fun, and can survive exposure to some of the elements,” Consumer Reports’s Elias Arias says.

Like water! And many of them have rugged exteriors that can hold up to being tossed in a beach bag. Such as the Bose SoundLink Color II. CR’s experts say it shines in all the right places.

“It’s good for sound," Arias says. "It’s very easy to use and it’s got decent versatility.” 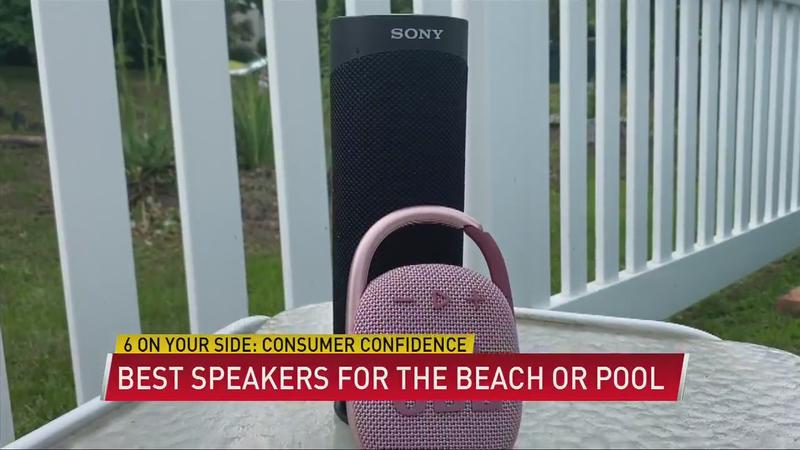 Several recommended models share a cylindrical shape that can fit easily in your backpack, including in its side water bottle pouch. Like the Sony SRS-XB23 and the JBL Flip 5. They’re both CR Best Buys that sound good and are really easy to use.

For a little more, there’s also the Ultimate Ears Megaboom 3. It gets solid scores across the board and CR says it’s loud enough to fill a medium to a large room.

If you’re looking for something smaller, more portable, and less expensive— look no further than the JBL Clip 4. Although it’s not an official CR-recommended model because its sound quality is lacking, testers say it’s good enough for podcasts or other casual listening. And it has a fun feature, “It has its own carabiner that allows you to hook it on to just about anything that has a loop or a latch or any place that you wanna hook it on," says Arias.

And a reminder about most Bluetooth speakers–you have to keep the music source—like your smartphone—within about 30 feet of the speaker, otherwise, the Bluetooth signal fades.